The man talks rapidly in Sinhala and I have no idea what he’s saying. Possibly telling me to hurry up because of the giant honey bee nests hanging nearby. I grip the railing with sweaty palms because bees are the least of my worries right now.

The bees at Sigiriya are known for being volatile. Some tourists climb in uncomfortably hot-looking beekeeping suits to ward off stings. I am not one of them. I’m mostly focused on not falling to my death.

I take a step and then another. A line of tourists behind the guide watches my painfully slow ascent.

At the top I stand beside a woman easily 20 years older than me. She’s catching her breath too. We both stand gasping for a few minutes before we can take a look around.

Later I’ll post beautiful views from the top with the history behind each picture. I’ll hesitate to focus on how hard it was for me. Everyone likes triumph over adversity, but I find it humiliating to admit the view didn’t come easily.

It’s not just the physical activity. It’s the sheer terror I get from heights.

It’s also the fear of being left behind. The fear of unwisely spending too much money on a tourist trap. The anxiety of not wearing the right clothes, maybe saying the wrong thing, of wondering what I ate that’s upset my stomach, when I’ll be able to get to a bathroom again, whether I’m a terrible girlfriend for even being here right now while Ryan is on the other side of the planet. I’m also nervous about the bees.

I step up into what must surely have been an impressive fortress. I look at the remnants of walls and pools, then gaze past to the deep green forests below.

I can see Katherine and Julia way up ahead. They’ve gone to take photos farther away from the other tourists. The girls look like they’ve gone right out to the edge, so I decide to look around by myself. I’ll gather the courage to go out there in a bit. 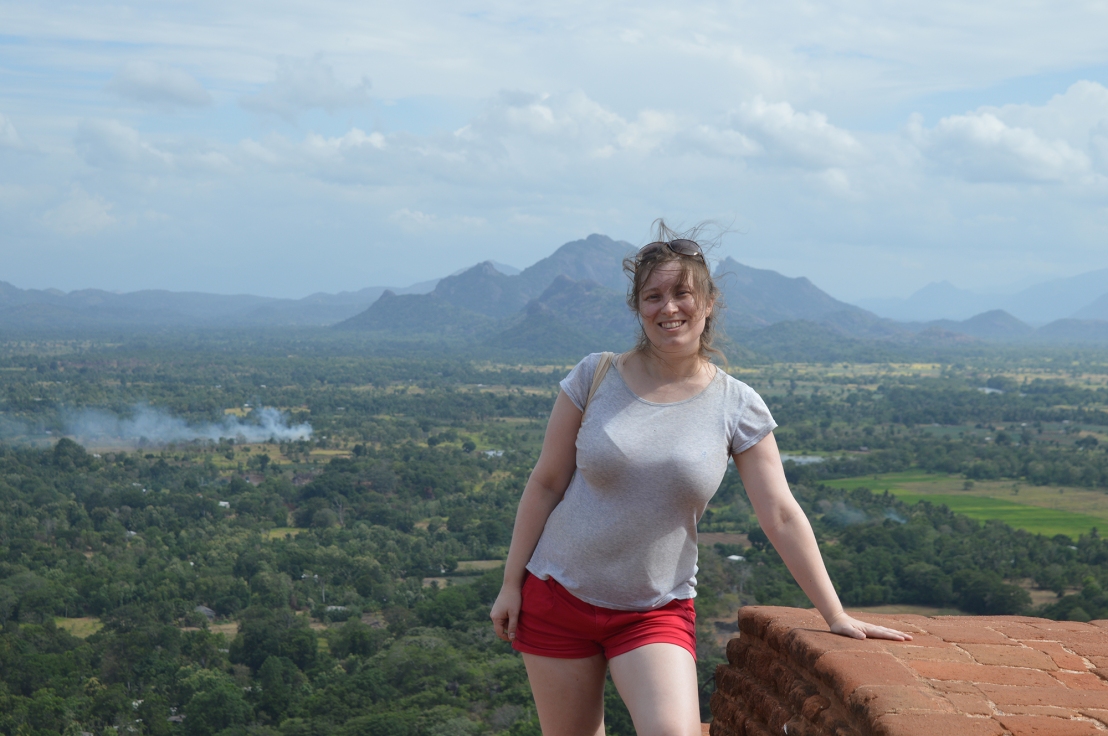 I envy their bravery.

It’s madness that I can brave bee attacks and push through my physical limitations to climb a rock fortress and still feel I’ve come up short.

The three of us talked about it earlier on our tuk tuk ride to Sigiriya. The way people back home sometimes tell us how brave we are, being in Sri Lanka.

We talked about how it doesn’t seem so brave when you know a lot of people who’ve done it. It seems even less brave when you think of some of the incompetent fools you’ve met doing the same thing.

Bravery seems like something reserved for heroes. We know we’re not remarkable.

Standing on the fortress, the wind blows hard. I imagine being blown over and falling to a painful death. I hold onto the railing.

Around me there are children and adults of all ages. One woman climbed with crutches. No one else is gripping onto anything with fear. I know I’m not remarkable.

But maybe bravery isn’t about the fearless climb up a mountain or how far I wandered from home. When friends from Canada say I’m brave, I like to think they mean more than my desire to make good use of my passport.

They know I hold a bundle of fear in my belly and I don’t let it stop me. Bravery isn’t absence of fear; it’s taking action in spite of it.

Later, on the way down, I still hold tightly to the railing and my breathing is shallow with fright. When we pass the bees’ nests, I shiver and stop. Sometimes I like to remember the things I fear most of all.

I take my shaking, sweaty hands off the railing, hold up my phone and take a photo. Then I carefully place the phone back in my bag, take back my grip on the banister and continue down to safety.

We went to Pyramid Island and looked out over the lake from a structure built by men at a relief camp during the Great Depression. If you had to be shipped out of town to avoid starting a communist rebellion (or whatever the fear du jour was), this camp had a pretty sweet view. #jasper #alberta #canada #history #mountains
After seeing Maligne Canyon, we decided to drive up and see party of the source (we could have driven farther and seen Maligne Lake and maybe the glacier the water runs off of, but we were hungry). It's caribou country, but we didn't see any. 😢 #jasper #alberta #canada
This hearse says "Sweet Dreams" in the window. Why not? #jasper #alberta #canada
He's my favourite travel partner. This weekend we're exploring Edmonton. #edmonton #alberta #canada
Two girls argued next to us about whether or not this really counted as a museum. As one of them said, it has artefacts and plaques, so obviously it qualifies. I was convinced. #edmonton #alberta #canada #neon #neonsigns
Albertasaurus welcomes us to Edmonton! #alberta #canada #dinosaur #museum